The menopause is the time when menstruation stops because the ovaries stop producing hormones and releasing eggs for fertilisation. This marks the end of a woman's reproductive years.
Male hypogonadism Multinodular goitre Glossary All Endocrine Conditions Resources for Endocrine Conditions 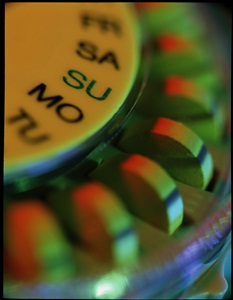 What is the menopause?

The menopause refers to the ending of a woman’s reproductive years following her last menstruation (period). It is a normal process that is caused by the loss of all the remaining follicles in the ovaries, which contain eggs. When the follicles die, the ovaries no longer secrete the hormones oestrogen and progesterone, which allow the lining of the womb to build up each month resulting in a monthly period.. As a result, menstruation ceases.

A few years before the menopause, menstrual periods may happen more or less often than normal, and the amount of bleeding may change. This time is called the perimenopause and can last for several years. It usually begins around age 45 to 55. However, women can still become pregnant during this time. The actual menopause happens at around 50 years of age, although the exact timing differs among individuals. When women go through the menopause before the age of 40, it is considered to be early menopause and is called premature ovarian insufficiency.

What causes the menopause?

The menopause occurs when all the remaining follicles in the ovaries are lost.

This causes the level of hormones (e.g. oestrogen) to reduce, causing a woman’s body to act differently. It is not known at exactly what age the woman will enter the menopause or what causes the ovaries to shut down but it is likely a question of aging or some programming in our genes that controls the function of the ovaries. Removal of the ovaries will cause immediate menopause and some types of cancer treatment (e.g. radiotherapy or chemotherapy) may also result in an early menopause.

What are the signs and symptoms of the menopause?

The main sign of the menopause starting is often noticed, as a change in menstrual period patterns, which can last up to four years but in some women, can be much longer. Around 80% of women suffer from some additional menopausal symptoms, though some women have few symptoms apart from the ending of menstruation. The most common menopausal symptoms are hot flushes (termed hot flashes in the US) and night sweats. These happen most commonly within the first year after the last period, although they can occur earlier. If severe, these can cause weakness and loss of energy, particularly night sweats, which may disturb normal sleeping patterns. Their severity tends to decrease with time.

Decreased production and release of oestrogen from the ovary can cause vaginal changes such as dryness and loss of muscle tone, which can make sexual intercourse uncomfortable or painful. This, along with sleep or mood changes, can lead to loss of interest in sex, also known as reduced libido.

Depression, anxiety and panic attacks may also occur but it is not clear whether these are related to life changes that are also likely to happen around the same time in a woman’s life, such as ‘empty nest syndrome’ (when children leave home or lifestyle changes significantly). Some women may experience problems with urinary control (incontinence), particularly those who are overweight or who have had multiple births.

How is menopause diagnosed?

To diagnose the menopause, a woman should have stopped her menstrual periods for a minimum of 12 months. Therefore, menopause can only be identified retrospectively. However, there are other symptoms (such as those described above) that can give an indication that a woman is undergoing the menopause, most commonly night flushes in combination with irregular periods. Another method is to measure the levels of hormones such as follicle stimulating hormone in a blood sample taken as an outpatient. This will be raised just before and after the menopause. This test may not give a decisive result, and is not recommended in women who are either over 45 or who are taking the contraceptive pill, but usually indicates if the ovaries are no longer secreting oestrogen or progesterone.

How is menopause treated?

The menopause is a naturally occurring event and many women do not require any treatment at all, or may be advised to make healthy lifestyle changes.

For most women, the benefits of taking short-term HRT to improve quality of life during the perimenopause usually outweigh the risks. An alternative form of treatment to HRT, particularly for the treatment of hot flushes, is non-hormonal medication such as paroxetine.

Vaginal creams, pessaries or a vaginal ring may be helpful for vaginal problems.

Women who show loss of bone density (osteoporosis) can be treated with vitamin D and calcium supplements and, for more severe cases, with drugs that prevent loss of bone mass, which weakens the bones. The most common drugs used are bisphosphonates.

HRT can cause tender breasts, water retention, weight gain, depression and nausea. These symptoms may depend on the type of HRT that is prescribed and women should seek advice from their doctor if they have concerns about the side-effects or they feel that they are unacceptable. For example, changing the type of prescription or reducing the overall dose of hormones may reduce unwanted side-effects.

It is recommended that HRT is only used to treat the short-term menopausal symptoms such as hot flushes and night sweats, and only for a period of two to three years. Longer-term use has been linked with a small increase in the risk of breast cancer, blood clots in the veins (known as thrombosis) and stroke. However, it is important to consider the balance of risks and benefits of taking HRT and this should be discussed with a doctor.

Bisphosphonates can cause a change in bowel habits, a feeling of sickness and tiredness, though these usually wear off after a few days of beginning treatment.