Erythropoietin is a hormone, produced mainly in the kidneys, which stimulates the production and maintenance of red blood cells.
Dihydrotestosterone Follicle stimulating hormone Glossary All Hormones Resources for Hormones

Erythropoietin is commonly referred to as EPO. It is also called haematopoietin or haemopoietin, but these names are rarely used today.

Erythropoietin (EPO) is a hormone that is produced predominantly by specialised cells called interstitial cells in the kidney. Once it is made, it acts on red blood cells to protect them against destruction. At the same time it stimulates stem cells of the bone marrow to increase the production of red blood cells. 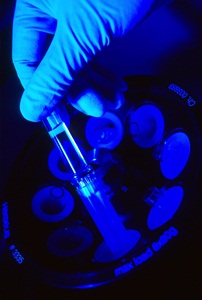 Erythropoeitin testing in sport. Blood sample being tested for the presence of the performance-enhancing hormone erythropoeitin.

What happens if I have too much erythropoietin?

Excess erythropoietin results from chronic exposure to low oxygen levels or from rare tumours that produce high levels of erythropoietin. It causes a condition known as polycythaemia which means high red blood cell count. In many people, polycythaemia does not cause any symptoms. However, there are some general and non-specific symptoms including weakness, fatigue, headache, itching, joint pain and dizziness.

What happens if I have too little erythropoietin?

If you have too little erythropoietin, which is usually caused by chronic kidney disease, there will be fewer red blood cells and you will have anaemia. Erythropoietin has been made synthetically for the treatment of anaemia that results from chronic kidney failure. It is also given to patients with some rarer types of cancer.
Some professional athletes have used this type of erythropoietin (known as blood doping) to improve their performance, particularly to increase endurance. Artificially increasing your erythropoietin levels produces more haemoglobin and red blood cells and therefore improves the amount of oxygen that can be delivered to tissues, particularly muscles. This can improve performance capacity, although this type of doping practice is banned by most professional sport committees.

Can we measure erythropoietin in the blood?

Yes, erythropoietin hormone levels can be measured in the blood. The test is done with a simple blood test, preferably a morning sample collection. A needle is used for drawing blood from a vein on your arm. You don’t need any special preparations prior to a blood test, however you have to let your healthcare provider know if you are taking any medications, vitamin supplements or any illicit drugs or herbs.

The test results may vary based on your age, sex, health status, and even the method used for the test. Your healthcare provider will discuss your results with you.

Raised levels of Erythropoietin in athletes indicate erythropoietin abuse (doping). EPO doping can boost the number of red blood cells and there by increased availability of oxygen to the muscles. This can help the athlete with increased performance ability and endurance. Blood doping is illegal especially in professional sports. Professional athletes are asked to take this test to find out if they are violating the anti-doping law.