The prostaglandins are a group of lipids made at sites of tissue damage or infection that are involved in dealing with injury and illness. They control processes such as inflammation, blood flow, the formation of blood clots and the induction of labour.
Prolactin Relaxin Glossary All Hormones Resources for Hormones 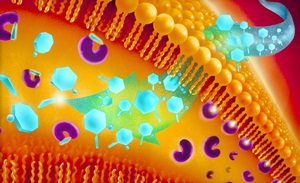 Prostaglandins act as signals to control several different processes depending on the part of the body in which they are made. Prostaglandins are made at sites of tissue damage or infection, where they cause inflammation, pain and fever as part of the healing process. When a blood vessel is injured, a prostaglandin called thromboxane stimulates the formation of a blood clot to try to heal the damage; it also causes the muscle in the blood vessel wall to contract (causing the blood vessel to narrow) to try to prevent blood loss. Another prostaglandin called prostacyclin has the opposite effect to thromboxane, reducing blood clotting and removing any clots that are no longer needed; it also causes the muscle in the blood vessel wall to relax, so that the vessel dilates. The opposing effects that thromboxane and prostacyclin have on the width of blood vessels can control the amount of blood flow and regulate response to injury and inflammation.

Prostaglandins are also involved in regulating the contraction and relaxation of the muscles in the gut and the airways.

Prostaglandins are known to regulate the female reproductive system, and are involved in the control of ovulation, the menstrual cycle and the induction of labour. Indeed, manufactured forms of prostaglandins - most commonly prostaglandin E2 - can be used to induce (kick-start) labour.

How are prostaglandins controlled?

Prostaglandins carry out their actions by acting on specific receptors; at least eight different prostaglandin receptors have been discovered. The presence of these receptors in different organs throughout the body allows the different actions of each prostaglandin to be carried out, depending on which receptor they interact with.

Prostaglandins are very short-lived and are broken down quickly by the body. They only carry out their actions in the immediate vicinity of where they are produced; this helps to regulate and limit their actions.

What happens if my levels of prostaglandins are too high?

High levels of prostaglandins are produced in response to injury or infection and cause inflammation, which is associated with the symptoms of redness, swelling, pain and fever. This is an important part of the body’s normal healing process.

However, this natural response can sometimes lead to excess and chronic production of prostaglandins, which may contribute to several diseases by causing unwanted inflammation. This means that drugs, which specifically block cyclooxygenase-2, can be used to treat conditions such as arthritis, heavy menstrual bleeding and painful menstrual cramps.  There is also evidence to suggest that these drugs may have a beneficial effect when treating certain types of cancer, including colon and breast cancer, however research in this area is still ongoing. New discoveries are being made about cyclooxygenases which suggest that cyclooxygenase-2 is not just responsible for disease but has other functions.

Anti-inflammatory drugs, such as aspirin and ibuprofen, work by blocking the action of the cyclooxygenase enzymes and so reduce prostaglandin levels. This is how these drugs work to relieve the symptoms of inflammation. Aspirin also blocks the production of thromboxane and so can be used to prevent unwanted blood clotting in patients with heart disease.

What happens if my levels of prostaglandins are too low?

Manufactured prostaglandins can be used to increase prostaglandin levels in the body under certain circumstances. For example, administration of prostaglandins can induce labour at the end of pregnancy or abortion in the case of an unwanted pregnancy. They can also be used to treat stomach ulcers, glaucoma and congenital heart disease in newborn babies. Further advances in understanding how prostaglandins work may lead to newer treatments for a number of conditions.