What are circadian rhythm sleep disorders? 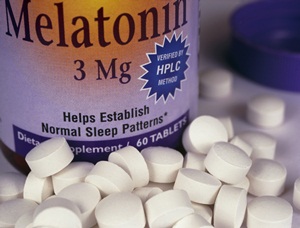 Melatonin pills can be taken to treat sleep disorders.

The timing, duration and quality of sleep are determined by two physiological processes:

The time that we go to bed and wake up is generally determined by our work, study and social commitments. So, for the majority of people who work or study on a 9 a.m. to 5 p.m. pattern, a ‘normal’ sleep schedule would probably involve going to bed between 10 p.m. and midnight, and getting up between 6 a.m. and 8 a.m. in the morning. However, sufferers of circadian rhythm sleep disorders have circadian clocks that are not synchronised with such a ‘normal’ sleep schedule; instead their body clock is telling them to go to sleep and wake up at very different times. The relationship between their circadian clock and local time (local light/dark cycles) is abnormal.

Having a circadian rhythm sleep disorder is similar to having permanent jet lag – a misalignment between the body clock, the local clock time and the light/dark cycle. This leads to problems in falling asleep when we want to, staying asleep and feeling fully rested, and also feeling sleepy during waking hours.

What are the signs and symptoms of circadian rhythm sleep disorders?

Sufferers of advanced sleep phase disorder have an ‘early’ circadian clock; they feel sleepy and want to go bed in the early evening (6 p.m. to 9 p.m.) and wake up in the early hours of the morning (2 a.m. to 5 a.m.). Consequently, they may have been awake several hours before they go to work and may not perform well or be alert. They will also feel sleepy in the late afternoon/early evening, which can affect their social lives.

In contrast, sufferers of delayed sleep phase disorder have a ‘late’ circadian clock; they are unable to fall asleep until the early hours of the morning (4 a.m. to 6 a.m.) and consequently will not awake until approximately midday. This disorder can make it difficult for the individual to get to work or college on time and if they are able to wake up in time, they will probably not have had enough sleep and so will not be alert or perform well. This can lead to growing fatigue.

Sufferers of non-24-hour sleep/wake syndrome do not have a continuous bout of sleep each night but, instead, have several short naps across the day and night.

Individuals with ‘free-running’ sleep patterns will experience a gradual drift each day in the time that they go to bed and wake up. This happens because our circadian clock does not run at exactly 24 hours. It runs at slightly more or slightly less, and environmental light signals at certain times of day are essential to fix it to running at 24 hours. In certain situations, these light signals may not be received or understood and so the circadian clock runs at its own speed. In individuals with clocks longer than 24 hours, this means that they will go to bed and get up progressively later each day and will become unsynchronised to local time.

The environment or situation a person finds themselves in can cause temporary circadian-related sleep disorders, for example, jet lag. Night shift workers can also struggle to properly adapt to their altered schedule of sleeping during the day as they often try to maintain daytime family and social commitments as well as their shift work pattern. This causes their body clock to be permanently misaligned with their desired sleep patterns.

Certain medical conditions are also associated with disrupted sleep patterns. For example, many blind people with no light perception suffer from free-running sleep patterns as the body clock does not perceive any environmental light signals and so the clock drifts at its own speed. As the tendency to sleep drifts across the 24-hour day, this can mean individuals are awake at night and sleepy during the day, which can be problematic for going to work or school. Patients with neurodegenerative disorders (e.g. Alzheimer’s and Parkinson’s disease) also experience disturbed sleep/activity patterns. They have increased agitation and pacing around at night, which is known as sundowning and is thought to be due to disruption to the circadian clock.

The number of people who suffer from circadian rhythm disorders in the general population is currently unknown.

An individual who believes they have ‘abnormal’ sleep patterns can consult a specialist. They will be asked to keep a sleep diary for several weeks and possibly wear a small wrist activity monitor that will identify when they are asleep and when they are awake. From these diaries and activity records, a diagnosis should be possible.

Treatment of advanced and delayed sleep phase disorder requires the circadian clock to be shifted so it is correctly aligned with local time and the desired sleep/wake schedule, and then held in this position. This can be achieved with a combination of a gradually shifting sleep schedule and light treatment. Bright light has shown to be the most effective mechanism of shifting the timing of the circadian clock.

A delayed sleep phase disorder patient can gradually shift their timing of sleep later and later each day until they reach the desired point, and then they must maintain this schedule. This can be assisted by using a bright light box in the morning when they wake up as this will stop the circadian clock from drifting later in time.

A patient with an advanced sleep phase disorder can gradually advance their sleep schedule until they reach the desired point and then this can be maintained. Using a bright light box in the early evening before bed will prevent the clock from drifting earlier in time. It may also be possible to use precisely scheduled light treatment for non-24-hour sleep/wake syndrome to try and increase the strength and signals from the circadian clock.

There are other ways of aiding restful sleep, sometimes described as developing good sleep hygiene:

Totally blind individuals who exhibit free-running sleep/wake patterns have been shown to benefit from taking melatonin pills at specific times of day. Although melatonin pills are available over the counter in the USA, they are only available on prescription in the UK. Melatonin is able to shift the timing of the body clock and daily administration at a specific time can be used to keep the clock appropriately synchronised to local time. Melatonin must be taken at the correct time of day to achieve the desired effects and avoid unwanted effects.

Gradually delaying (shifting later) or advancing (shifting earlier) the timing of sleep will take a few days and during this time it is necessary to avoid daytime commitments, which could be inconvenient. Fitting a light treatment into a daily schedule may not always be possible but light boxes can be used in conjunction with, or around, other activities such as reading, eating and watching television, which should help. Some individuals can experience headaches or nausea or find the lights in very bright light boxes too bright to use comfortably. New boxes are being developed to try and use lower light intensities that are still effective.

What are the longer-term implications of circadian rhythm sleep disorders?

Some people may be able to adapt their work and social life around their altered sleep patterns so that they do not need to shift their timing of sleep. However, for most people suffering from a circadian rhythm sleep disorder, trying to maintain a normal working life can result in loss of sleep, fatigue and daytime sleepiness. It is possible to shift the timing of sleep and maintain it at an appropriate time, but this will require some changes to an individual’s routine (e.g. using a light box or not scheduling social activities when they should be sleeping).