Goitre is a general term for an enlarged thyroid gland. Depending on the type of swelling, location, how it affects gland function and how long it has been present, goitre has various effects and is treated in a variety of different ways.
Glucagonoma Graves' disease Glossary All Endocrine Conditions Resources for Endocrine Conditions 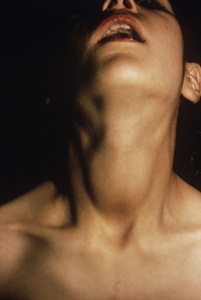 Swollen neck of a patient with goitre.

Goitre can be due to enlargement of the whole thyroid gland, known as ‘smooth goitre’ or ‘diffuse goitre’, or part of the gland, called a ‘nodular’ or ‘cystic’ goitre. Many people with goitre have normal thyroid hormone levels but some can have an underactive thyroid (hypothyroidism) or an overactive thyroid (hyperthyroidism).

There are a number of different causes for goitre including:

What are the signs and symptoms of goitre?

It is common to have small nodules within the thyroid gland, which cannot be felt, but may be picked up by chance when scans or examinations are conducted for other reasons. In these cases, there have usually been no symptoms to indicate the presence of goitre. Larger goitres simply present as a lump in the neck. Occasionally, a large goitre will press on nearby structures, for instance making it difficult to swallow or to breathe.

How common is goitre?

Worldwide, goitre is estimated by the World Health Organization to affect around 12% of people, although the rate of goitre in Europe as a whole is slightly lower. Goitre affecting a particular area (endemic) occurs in areas where there is iodine deficiency and is defined when more than 1 in 10 people have goitre.

Some forms of goitre can be inherited. There is some evidence that the presence of goitre in one family member increases the chances of other family members having goitre.

How is goitre diagnosed?

Goitre is diagnosed when the thyroid gland is enlarged enough to be felt by external touch or is clearly visible without a scan. Usually a GP will undertake thyroid function tests to measure the levels of thyroid hormones and thyroid antibodies in the bloodstream. They may also arrange an ultrasound scan or make a referral to an endocrinologist for outpatient assessment. Where more complex tests are required, they may include:

How is goitre treated?

Treatment depends on the underlying cause of the goitre. ‘Simple’ goitre, where there is no thyroid hormone imbalance and no problems arising from the size of the thyroid, is unlikely to cause problems. In case the goitre is large and symptomatic (difficult to swallow or to breathe), it may be appropriate to consider surgery (a thyroidectomy), though this will result in the patient requiring lifelong thyroxine (thyroid hormone) replacement.

Treatment of overactive and underactive thyroid is explained in articles on hyperthyroidism and hypothyroidism, respectively.

Surgery carries the normal risks of any operation (the risks from anaesthetic, post-operative infection, haemorrhage, bleeding and scar formation), and will result in an underactive thyroid. It can rarely cause specific complications with damage to the recurrent laryngeal nerve (controlling the voice box) resulting in a hoarse voice, or damage to the glands around the thyroid (parathyroid glands), which control calcium. This may result in a low calcium level (hypocalcaemia) in the blood, which would require medication.

What are the longer-term implications of goitre?

Usually there are no long-term implications of goitre, and the safest thing is to avoid unnecessary surgery once medical assessment has been made.