The placenta is a temporary endocrine organ formed during pregnancy, which produces hormones important in the maintenance of a healthy pregnancy and in preparation for labour and breastfeeding.
Pituitary gland Testes Glossary All Glands Resources for Glands

Where is the placenta? 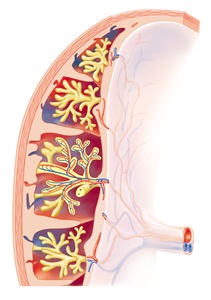 The placenta connects the developing fetus to the wall of the mother’s uterus during pregnancy. It grows in the wall of the uterus and is attached to the fetus within the uterine cavity by the umbilical cord. The placenta is formed by cells that originate from the fetus and is therefore the first of the fetal organs to develop.

What does the placenta do?

The placenta contains a complex network of blood vessels that allow the exchange of nutrients and gases between the mother and the developing fetus. The blood supply of the mother does not actually mix with that of the fetus; this exchange occurs by diffusion of gases and transport of nutrients between the two blood supplies (see figure). The transfer of nutrients and oxygen from the mother to the fetus, and waste products and carbon dioxide back from the fetus to the mother, allows the growth and development of the fetus throughout pregnancy. Antibodies can also pass from the mother to the fetus, providing protection from certain diseases. This benefit can last for several months after birth.

In addition to the transfer of substances, the placenta has two other main functions. It can act as a barrier between the mother and the fetus, preventing some harmful substances in the blood of the mother from damaging the fetus. However, it cannot exclude all harmful substances passing to the fetus. For example, alcohol can cross the placental barrier. The placenta also acts as an endocrine organ, producing several important hormones during pregnancy. These hormones work together to control the growth and development of the placenta and the fetus, and act on the mother to support the pregnancy and prepare for childbirth.

What hormones does the placenta produce?

The placenta produces two steroid hormones – oestrogen and progesterone. Progesterone acts to maintain pregnancy by supporting the lining of the uterus (womb), which provides the environment for the fetus and the placenta to grow. Progesterone prevents the shedding of this lining (similar to that which occurs at the end of a menstrual cycle), since this would result in pregnancy loss. Progesterone also suppresses the ability of the muscular layer of the uterine wall to contract, which is important in preventing labour from occurring before the end of pregnancy. Oestrogen levels rise towards the end of pregnancy. Oestrogen acts to stimulate the growth of the uterus to accommodate the growing fetus and allows the uterus to contract by countering the effect of progesterone. In this way, it prepares the uterus for labour. Oestrogen also stimulates the growth and development of the mammary glands during pregnancy, in preparation for breastfeeding.

The placenta also releases several protein hormones, which include human chorionic gonadotrophin' data-content='1392' >human chorionic gonadotrophin, human placental lactogen, placental growth hormone, relaxin and kisspeptin. Human chorionic gonadotrophin is the first hormone to be released from the developing placenta and is the hormone that is measured in a pregnancy test. It acts as a signal to the mother’s body that pregnancy has occurred by maintaining progesterone production from the corpus luteum, a temporary endocrine gland found in the ovary. The function of human placental lactogen is not completely understood, although, it is thought to promote the growth of the mammary glands in preparation for lactation. It is also believed to help regulate the mother's metabolism by increasing maternal blood levels of nutrients for use by the fetus. A similar role is played by placental growth hormone, which predominates during pregnancy due to suppression of growth hormone produced by the maternal pituitary gland. Relaxin causes the relaxation of pelvic ligaments and softening of the cervix at the end of pregnancy, which aids the process of labour. Kisspeptin is a recently identified hormone, which is important for many aspects of human fertility. In the placenta, kisspeptin appears to regulate placental growth into the lining of mother’s womb (endometrium). A number of other peptide hormones have been recently identified to regulate blood vessel formation within the placenta, which is crucial in allowing the placenta to exchange nutrients from the mother to baby; these peptide hormones include soluble endoglin (sEng), soluble fms-like tyrosine kinase 1 (sFlt-1) and placental growth factor (PlGF).

What could go wrong with the placenta? 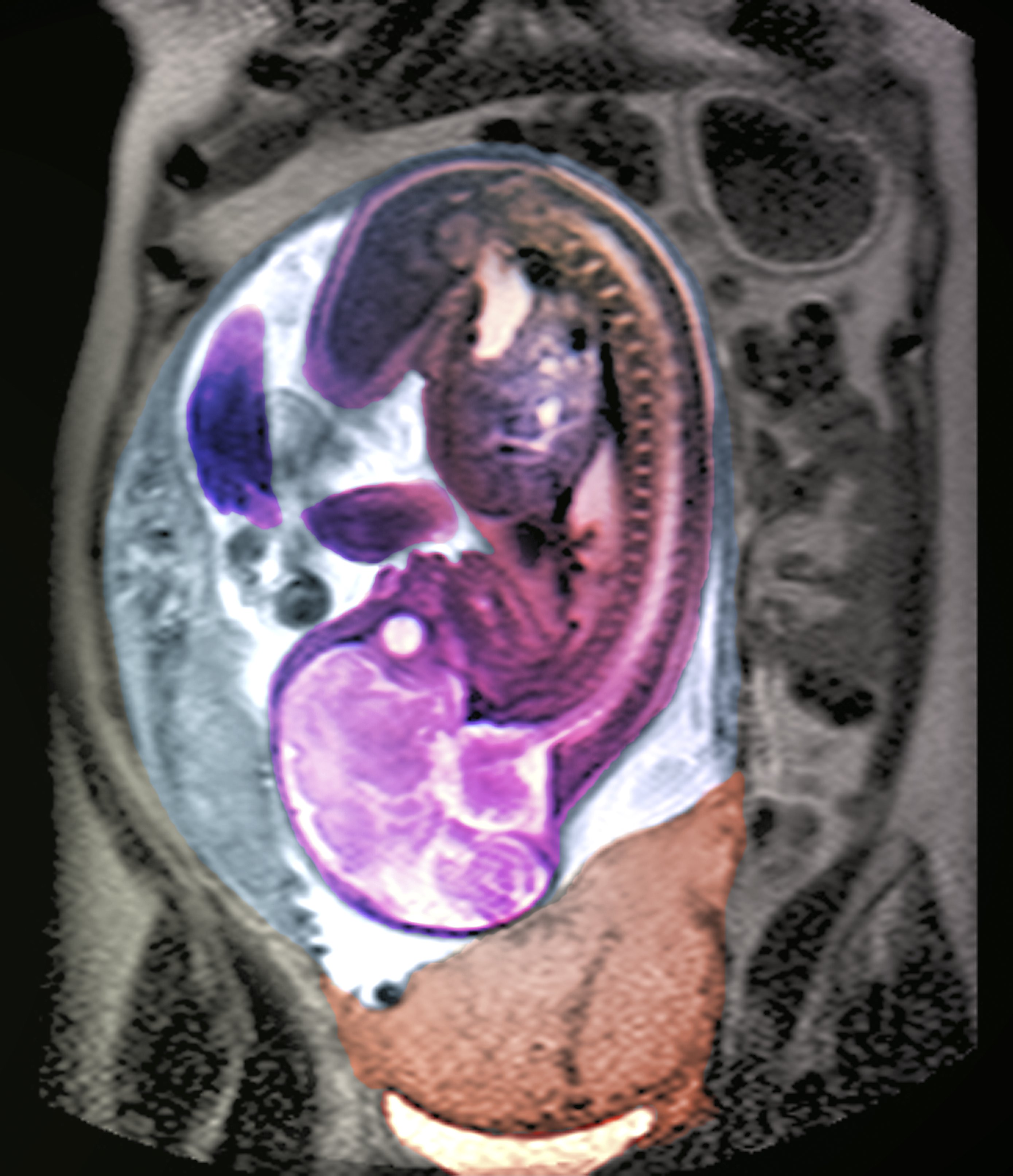 Coloured pelvic magnetic resonance imaging (MRI) scan of a pregnant woman with placenta praevia. The placenta (lower centre) is blocking the cervix, the exit to the womb. The fetus is in 'head down' position (the brain can be seen, lower left).

Sometimes the placenta does not grow properly or it grows in the wrong place in the wall of the mother's uterus. The placenta can attach very low down in the uterus and may cover the cervical opening into the birth canal. This is known as placenta praevia, and can cause bleeding later in pregnancy and problems with childbirth upon labour. When the placenta grows too deeply into the wall of the uterus, invading through the lining and into the muscle layer, this is known as placenta accreta. In this situation, the placenta cannot separate normally from the wall of the uterus after childbirth which can cause severe bleeding in the mother. Placental abruption results from premature separation of the placenta from the uterus, before the onset of labour. This can interrupt the blood supply of nutrients and oxygen to the fetus and cause bleeding in the mother. Abnormal formation of the placenta has also been linked with two of the most common pregnancy disorders – pre-eclampsia, which causes a set of symptoms including high blood pressure in the mother, and fetal growth restriction, where the baby fails to reach its genetically determined growth potential; both can result in stillbirth and are associated with poor health in later life. Infections involving the placenta may occur, and can be harmful to the foetus if they are passed across the placental barrier. Recent studies have suggested that measuring placental hormones such as sEng, sFlt-1 and PlGF may help to identify women at increased risk of fetal growth restriction and pre-eclampsia. See the article on 'Hormones and fetal growth' for more information.