What is a phaeochromocytoma? 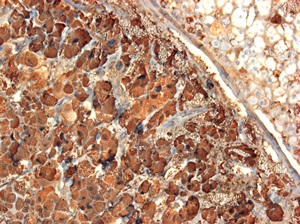 Light micrograph of a section through a phaeochromocytoma tumour of the adrenal gland. At left in the medulla, large tumour cells are seen arranged in cords or small masses marked by chromogranin A (blue); at upper right the normal adrenal cortex is seen.

A phaeochromocytoma is a tumour from the central part of the adrenal gland (sitting on top of each kidney) called the adrenal medulla. The adrenal medulla is responsible for the production of hormones including adrenaline (epinephrine) noradrenaline (norepinephrine) and to a lesser extent dopamine, which are needed for the ‘fight or flight response’ when the body becomes ready for stressful events or increased physical activity. Phaeochromocytomas often produce an excess of these hormones. Phaeochromocytomas are related to a similar type of tumour found outside the adrenal gland called a paraganglioma.

The cause of phaeochromocytomas is not known, the same as any other tumour. If the tumour develops in cells in the medulla of the adrenal gland, then it might secrete an excess of adrenaline or noradrenaline or both. In some families, certain genes appear to be involved in developing tumours and there are a few genes that seem to be associated with the growth of a phaeochromocytoma.

What are the signs and symptoms of a phaeochromocytoma?

Phaeochromocytomas may not cause any symptoms and may only be found incidentally. However, signs and symptoms can be caused by either excess hormone being released into the bloodstream, local growth or the distant spread of a tumour.

The release of high levels of hormones like adrenaline and noradrenaline can cause very high blood pressure. Other symptoms include headaches, a racing heart, sweating and anxiety. These hormones may be released in bursts, so symptoms may come and go. Patients may describe an episode as a panic attack or associated with a ‘feeling of impending doom’.

Signs and symptoms may also relate to the tumour growing and pressing on other organs. If the tumour remains undiagnosed and hormone levels are very high, patients can become very ill and the disease may become life-threatening.

Phaeochromocytomas are rare tumours. Estimates would suggest between one to eight cases per million people making up to 500 cases in the UK per year. However, many of these tumours remain undiagnosed. Phaechromocytomas account for 3-8 %of all adrenal masses unexpectedly detected by imaging studies. It is the cause of high blood pressure in 0.1-0.6% of patients with sustained high blood pressure.

It will usually be non-cancerous (benign), although around 1 in 10 are cancerous (malignant).

Phaeochromocytomas may occur randomly (sporadic) or be inherited in families (familial). They occur most commonly in middle age (30-60 years) but can occur in children. Approximately a quarter of people with a phaeochromcytoma have familial disease and a genetic abnormality. This does not mean all members of the family will develop a tumour, however. Some genetic abnormalities may be associated with other types of tumours. Conditions associated with phaeochromocytoma include von Hippel-Lindau disease, multiple endocrine neoplasia type 2a and type 2b and the familial paraganglioma syndromes.

How is a phaeochromocytoma diagnosed?

If a patient does not have symptoms, phaeochromocytomas may remain undiagnosed. They are typically found incidentally when having an abdominal scan for an unrelated reason.

If the patient has symptoms, the doctor may carry out an examination including an assessment of the blood pressure and pulse. Initial investigations may include a 24-hour urine collection or blood test to measure the adrenaline and noradrenaline related chemicals’ levels in the body. This will occur as an outpatient.

If those levels are raised, a magnetic resonance imaging scan (MRI) or computerised tomography (CT) scan will be carried out to find the tumour. Nuclear medicine scans including metaiodobenzylguanidine (MIBG) or a positron emission tomography (PET) scan can be additionally used to confirm the site of the tumour or whether there is any evidence of tumour spread. These scans will occur as outpatient tests.

Blood samples may be taken to carry out genetic testing if appropriate.

How is a phaeochromocytoma treated?

Patients will normally be placed on medications to block the effects of excess hormones. These are called alpha-blockers (phenoxybenzamine, doxazosin, prazosin, terazosin) and beta-blockers (propranolol, labetalol).

Surgical removal of the tumour is the best curative treatment. A patient may need to take tablets for several days prior to surgery to ensure the blood pressure is well controlled. Surgery should be carried out by a surgeon and anaesthetist experienced in operating on this type of tumour and in centres where there is a multidisciplinary endocrine team that deals with these tumours.

If the tumour has spread or surgery cannot be undertaken or any residual tumor after surgery, then other treatments include chemotherapy and/or a radioactive form of treatment called radiolabelled MIBG.

Medication that blocks hormones like adrenaline and noradrenaline may cause side-effects including dizziness on standing, low blood pressure, a stuffy nose and cold hands and feet.

Side-effects of surgery include bleeding, infection or damage to other nearby organs, e.g. kidney or the spleen. These side-effects are unusual when a multidisciplinary endocrine team is involved.

What are the longer-term implications of a phaeochromocytoma?

Many patients with a phaeochromocytoma return to very good health after treatment. However, patients need long-term follow-up to make sure that no new tumour develops in the future. This is unusual but happens in about 10% of patients. Effects as a result of the high blood pressure and raised adrenaline and noradrenaline levels may persist and may need to be

monitored, e.g. kidney damage. Follow-up will include blood pressure monitoring and measurement of adrenaline and noradrenaline related chemicals in urine or blood.

If the tumour is completely removed at initial surgery, most patients are cured. Phaeochromocytomas are generally slow-growing tumours. Survival rates are reduced if the tumour spreads, but patients may still live for many years with treatment despite this.