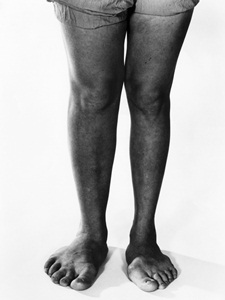 Enlargement of the feet due to pituitary hyperfunction (gigantism).

Growth hormone is a key hormone, produced by the pituitary gland that regulates growth during childhood by promoting bone growth directly and helping to control the metabolism. This is a relatively stable process during childhood until puberty is reached.  During puberty, sex hormone secretion (oestrogen in females and testosterone in males) increases significantly and causes the growth plates (epiphyses) found at the ends of long bones to slowly fuse together. Height growth stops at the end of puberty when the growth plates have completely joined.

Gigantism is a rare endocrine disorder caused by unusually high growth hormone levels found during childhood and adolescence before the growth plates in the bones have closed. The excessive amount of growth hormone accelerates the growth of muscle, bones and connective tissue leading to an abnormally increased height as well as a number of additional soft tissue changes. When left untreated or uncontrolled, some individuals suffering from gigantism have grown in excess of eight feet (2.43 m) tall. The most famous example is that of Robert Wadlow, the tallest person in history at 8ft 11 in tall (2.71 m).

Gigantism is usually caused by a non-cancerous tumour in the pituitary gland (called a benign adenoma) that produces too much growth hormone.

Pituitary tumours can be small in size (micro-adenoma) or large (macro-adenoma). However, in gigantism, they are frequently large and invade nearby brain tissue. The size of the adenoma directly affects the signs and symptoms experienced by the individual (see below).

What are the signs and symptoms of gigantism?

The signs and symptoms of gigantism are usually due to the excessive amount of growth hormone production and sometimes due to the pressure that larger adenomas may have within or in the brain areas close to the pituitary gland.

The excessive amount of growth hormone can lead to:

A larger pituitary adenoma pressing in surrounding areas can also cause:

How common is gigantism?

Gigantism is an extremely rare condition, which most endocrinologists may come across only a couple of times in their whole careers. Only approximately six new cases occur each year in the United Kingdom.

Gigantism is generally not inherited. There are, however, a number of rare conditions associated with gigantism such as McCune Albright syndrome, neurofibromatosis, Carney complex and multiple endocrine neoplasia type 1 and 4. Gigantism seen in these conditions is still rare.

Recently, a new possible cause of pituitary tumours in families has been suggested, particularly tumours secreting growth hormone or prolactin. These often occur at a relatively young age and are thought to be caused by a genetic mutation.

How is gigantism diagnosed?

If gigantism is suspected, the diagnosis is usually confirmed by taking blood tests to measure the levels of growth hormone and insulin-like growth factor 1 (IGF1) circulating in the blood.  IGF1 is released into the blood primarily by the liver in response to growth hormone.

A magnetic resonance imaging (MRI) scan is undertaken to assess the size of the pituitary gland and the degree of compression of surrounding structures. These investigations are all performed as an outpatient.

How is gigantism treated?

Gigantism requires early diagnosis and treatment in order to prevent excess height and to improve life expectancy. If it is left untreated, gigantism is associated with significant complications and an increased death rate of around twice the normal average for the population. The aim is to reduce growth hormone levels below 2.5 micrograms per litre since this brings back the life expectancy to normal levels, significantly improves symptoms and prevents most of the associated complications.

Surgery is usually the first recommended treatment and is usually performed as a planned hospital admission. The operation aims to remove or reduce the size of the tumour to lower growth hormone levels and reduce the pressure on the optic nerve (needed for your eyes to work) and other nearby areas. The type of surgery performed will depend on the tumour’s size and how easily it can be removed.

Drug therapy may also be used in the following circumstances:

Side-effects from surgery can include haemorrhage, infection, loss of sense of smell or damage to the pituitary gland resulting in pituitary hormone deficiencies (hypopituitarism). Hypopituitarism is treated by replacing those hormones that are low, for example hydrocortisone' or thyroid hormone tablets (see the article on hypopituitarism for further details).

Radiation therapy to the pituitary gland can also cause hypopituitarism. It may increase the risk of premature stroke or worsening memory but not all doctors are agreed on this.

Dopamine-based drugs can cause reduced appetite, nausea, vomiting and dizziness. Somatostatin analogues are given by injection and can cause skin and muscle irritation at the site of the injection. These drugs can also cause tummy upset (most commonly diarrhoea and cramping abdominal pain) shortly after injections. About 20% of patients develop gallstones after long-term use but this does not usually cause symptoms. Pegvisomant can disturb the liver function and regular blood tests are used to monitor this.

Patients should consult their endocrinologist (specialist hormone doctor) if they have any concerns about side-effects.

What are the longer-term implications of gigantism?

Following the diagnosis of gigantism, regular, long-term follow up by an endocrinologist is needed to monitor hormone levels (both growth hormone and IGF1). This helps to detect any tumour growth and screening for complications that might have occurred.

Some of the long term complications that some people might experience relate to the excessive height and overall effects on soft tissues and internal organs. For example:

Practical, daily tasks such as buying clothes, shoes, furniture made for “average-size people” can also diminish the quality of life and this may contribute to some psychological issues observed in this group of patients.