Acromegaly is a condition that develops due to overproduction of growth hormone, usually caused by a benign tumour of the pituitary gland. It leads to an increase in size of the hands and feet, a change in the appearance of the face and enlargement of the internal organs.
Addison's disease Glossary All Endocrine Conditions Resources for Endocrine Conditions 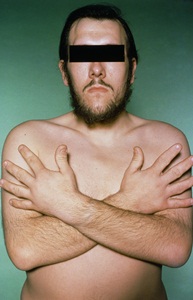 Image showing a gentleman with some features of acromegaly – prominent ridges above the eyes and large spade-like hands.

Acromegaly literally means enlargement of the extremities of the body. The tumour in the pituitary gland secretes excess growth hormone and this leads to an increase in the size of the hands and feet, thickening of the skin and a change in the appearance of the face. Whilst in children too much growth hormone will result in gigantism where they become very tall, in adults, since the growth plates of the bones have fused, it leads to an increase in size of the hands and feet, and enlargement of the internal organs. Growth hormone also has effects on metabolism, so the patient might also have abnormally high glucose levels or diabetes mellitus' data-content='1282' >diabetes mellitus.

Acromegaly is usually caused by a benign tumour of the cells that make growth hormone in the pituitary gland.

What are the signs and symptoms of acromegaly?

Symptoms of acromegaly often develop slowly over a number of years. Symptoms are due to both the excess amount of growth hormone produced and by the mass itself (visual field defect, headache, etc). People with acromegaly have a gradual increase in the size of their hands and feet. They may need to change their shoe size or have rings enlarged. Sometimes there is numbness, 'pins and needles' and pain in the hands, particularly around the thumb. This is called carpal tunnel syndrome.

People with acromegaly may suffer with headaches, aches and pains in their bones and joints, and increased sweating. People who have not seen them for some time may be aware of a change in their appearance and this can often be seen when looking at photographs over a number of years.

Changes in the appearance of the face include enlargement of the nose, prominent jaw and forehead (with an increase in skin creases), a big tongue and spaces appearing between the teeth.

People with acromegaly tend to snore loudly in bed at night and can suffer with morning headaches and sleepiness during the day. This is called obstructive sleep apnoea.

Occasionally the benign pituitary tumour (or adenoma) can press on the nerves to the eyes leading to a loss of vision. Usually the vision in the middle remains clear, but the outer vision can be blurred or not there at all.

How common is acromegaly?

It is quite uncommon. There are approximately 200–300 new cases of acromegaly being diagnosed each year in the UK.

Usually acromegaly is not inherited. Very rarely, acromegaly is inherited in either a condition called 'familial isolated pituitary adenoma' or as part of multiple endocrine neoplasia type 1 (MEN; see the article on MEN1 for further information).

Recent research has shown a small number of families in which acromegaly has been inherited. This inherited form of acromegaly has been given the name familial isolated pituitary adenoma. If someone has the gene for this condition, they are more likely to develop the pituitary tumour and release excess growth hormone when they are teenagers, rather than when they are older. As a teenager, the extra growth hormone makes patients very tall because it occurs when the bones are still able to grow.

How is acromegaly diagnosed?

Based on the clinical signs described above, your doctor will do some blood tests. The growth hormone levels and insulin-like growth factor 1 (IGF-1) are often elevated in acromegaly. To confirm the diagnosis, a test called an oral glucose tolerance test is performed, where the patient is given a sugary (glucose) drink. The growth hormone level in the blood does not fall if the patient has acromegaly, whereas in people without the condition, it does. At diagnosis, the endocrinologist (specialist doctor) will also ensure that all the other pituitary hormones produced by the pituitary gland are working normally.

In addition, they will arrange for a scan of the pituitary gland, usually a magnetic resonance imaging scan (MRI) and a visual field assessment to check whether the patient has any areas of vision that may be affected by a pituitary tumour.

How is acromegaly treated?

Surgery is recommended in most people with acromegaly. If there is pressure on the nerves to the eyes, this can be relieved and vision improved. In most cases the operation is performed via the nose. Surgery offers a possible cure for acromegaly in the majority of patients.

In cases where surgery is not possible or has not been successful, acromegaly may be treated with monthly injections that reduce the release of growth hormone from the pituitary gland. The injections can also sometimes control the size of the pituitary tumour. These are called somatostatin analogues (octreotide and lanreotide). There is also a daily injection of pegvisomant, which stops growth hormone having an effect on the patient's body. Tablets, known as dopaminergics, can also be given. These tablets (cabergoline, quinagolide and bromocriptine) lower growth hormone levels. In general, the injections are much more effective than the tablets and the endocrinologist will monitor the response to treatment with blood investigations and scans.

Radiotherapy may be recommended when surgery has not been possible or has not been effective. This does not mean that the patient has a malignant tumour or cancer. It involves the patient having a Perspex mask made of his or her face and attending hospital for radiotherapy usually for five days per week, for five weeks.

Are there any side-effects to treatment?

Pituitary surgery can lead to a reduction in the levels of other hormones normally produced by the pituitary gland (see the article on hypopituitarism for further information). All patients will have their pituitary hormone levels monitored after surgery. Replacement treatments are available to restore hormone levels to normal. Other complications of surgery can include excessive bleeding, infection and abnormal sodium levels.

The medical treatments have a number of side-effects, which are usually mild. Somatostatin analogues may cause stomach upsets, diarrhoea and, rarely, gallstones. The dopaminergics can cause loss of appetite, nausea, vomiting and dizziness. Pegvisomant can disturb the liver function and regular blood tests are used to monitor this. The endocrinologist will explain these fully and change the treatment depending on the response in order to limit any side-effects.

Radiotherapy lowers growth hormone levels over a number of years and prevents the growth of the pituitary tumour. In a significant number of people, it will also lead to a fall in the production of other pituitary hormones. This will be closely monitored by the endocrinologist who will be able to replace any hormones that are lacking. Short-term side-effects – such as blurred vision, headaches and lethargy – may also occur. Patients should discuss any concerns with their doctor or specialist.

What are the longer-term implications of acromegaly?

In patients who are treated at an early stage (and who have smaller tumours), growth hormone levels can be returned to normal in a significant number of cases. In these individuals there may be no long-term implications, though continued follow-up to detect any recurrence is important.

Certain features of acromegaly may not be reversible. Examples of these are where acromegaly has developed over a period of time and there have been changes in the shape of bones and particularly of development of other features typical of acromegaly such as high blood pressure, diabetes or arthritis. These can continue following treatment. Other problems that affect the quality of life of people with acromegaly include arthritis, which can be progressive, and the fact that there is a possible increased risk of heart disease and sometimes bowel tumours. Because of these problems, patients who have had acromegaly need regular screening for possible bowel tumours and heart disease.

Are there patient support groups for people with acromegaly?

Pituitary Foundation may be able to provide advice and support to patients and their families dealing with acromegaly.