Rickets is a condition in children where there is abnormal softening of the bones due to lack of minerals to strengthen it. It is also known as osteomalacia in adults.
Resistance to thyroid hormone Secondary hyperparathyroidism Glossary All Endocrine Conditions Resources for Endocrine Conditions 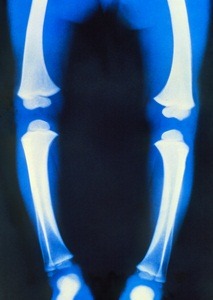 Coloured X-ray of the weakened bones and bowed legs of a child suffering from rickets.

In order for our bones to remain strong throughout our lives, they are constantly being broken down and rebuilt to maintain their normal structure. The whole of our skeleton is renewed approximately every eight years in adulthood, and much more frequently in children. Minerals such as calcium and phosphate form part of the bone’s structure to strengthen it and protect it from damage. This process (known as mineralisation) is aided by vitamin D, which also helps the body absorb enough calcium from the diet to provide the body with the building blocks to build bones. If a person lacks calcium or vitamin D, this will result in a softening of the bones. In adults, this condition is known as osteomalacia. In children, the same condition is called rickets. As the bones are growing, children with rickets end up with bony deformities because of softening of the bones.

There are several causes of this condition:

What are the signs and symptoms of rickets/osteomalacia?

Symptoms of osteomalacia can be vague with the person complaining of not feeling well with general aches and pains. Widespread bone pain, especially in the hips and lower back, can occur. The bones can be unnaturally tender even with moderate pressure. In later stages, the person may develop muscle weakness, particularly of the thighs, which causes difficulty in getting up from a sitting position and walking up stairs.

In children, rickets can cause:

Children may have bone pain and weak muscles leading to delayed walking or a change in the way they walk (gait). This is sometimes called a waddling gait. As bones are fragile, broken bones are more common and this can happen without significant injury. Rickets can also cause delayed formation of teeth and weakening of the enamel.

Severe vitamin D deficiency can also lead to a fall in calcium levels (hypocalcaemia), which can cause numbness or tingling around the mouth and in the fingers and toes.

In the UK, about 1.6% of the population has rickets, mainly in the ethnic minorities such as people from India and Pakistan. About 50% of people in the UK have low levels of vitamin D, which is less serious.

Usually it is not inherited. Rarely, rickets can run in families where there is a problem in vitamin D activation (vitamin D dependent rickets type 1). Another rarer type of inherited rickets is hereditary vitamin D resistant rickets (previously known as vitamin D dependent rickets type 2) where there is a problem with the body not responding to the actions of vitamin D. This is very rare, with fewer than 50 known families affected worldwide. Another very rare inherited disease is X-linked hypophosphataemic rickets, where people have very low levels of phosphate in the blood due to a subtle, genetically determined, kidney defect.

Diagnosis is made through taking a medical history and simple blood tests to check vitamin D, calcium, phosphate and parathyroid hormone levels. The doctor may also use the blood tests to check kidney and liver function. X-rays may be taken to show some characteristic bone changes although this is not always needed to make the diagnosis. The doctor may also arrange a dual energy X-ray absorptiometry (DEXA bone scan) to check how much calcium the patient has in their bones, although this is often left until after vitamin D levels have been replaced to avoid confusion with osteoporosis, which is different from osteomalacia.

As the majority of cases are due to vitamin D deficiency, treatment is with vitamin D replacement. This can be in the form of tablets or liquid medication.

However, if the patient is severely deficient in vitamin D or has very severe symptoms, larger doses of vitamin D may be given. This can be taken either orally every few weeks or through an injection given into the muscle every few months. Injections may also be considered for people who have a problem with absorbing the medication.

Patients generally cope well with treatment. Serious side-effects are rare if the correct dose is taken.

What are the longer-term implications of rickets/osteomalacia?

If rickets is not identified and treated before the bones stop growing, a child may be left with some deformities, often bowing of bones in the legs. In adults, untreated osteomalacia can cause an increased chance of breaking bones and a low level of calcium in bones, particularly in old age.

A good diet is important in order to prevent rickets/osteomalacia. Calcium can be found in cow’s milk and dairy products. Oily fish such as sardines, mackerel and salmon are good dietary sources of vitamin D. In the UK, foods such as breakfast cereals and margarine are fortified with vitamin D. Adequate exposure to sunlight is important, especially between April and October for around 15 minutes daily.