The ovaries produce and release eggs (oocytes) into the female reproductive tract at the mid-point of each menstrual cycle. They also produce the female hormones oestrogen and progesterone.
Kidneys Pancreas Glossary All Glands Resources for Glands

Where are the ovaries? 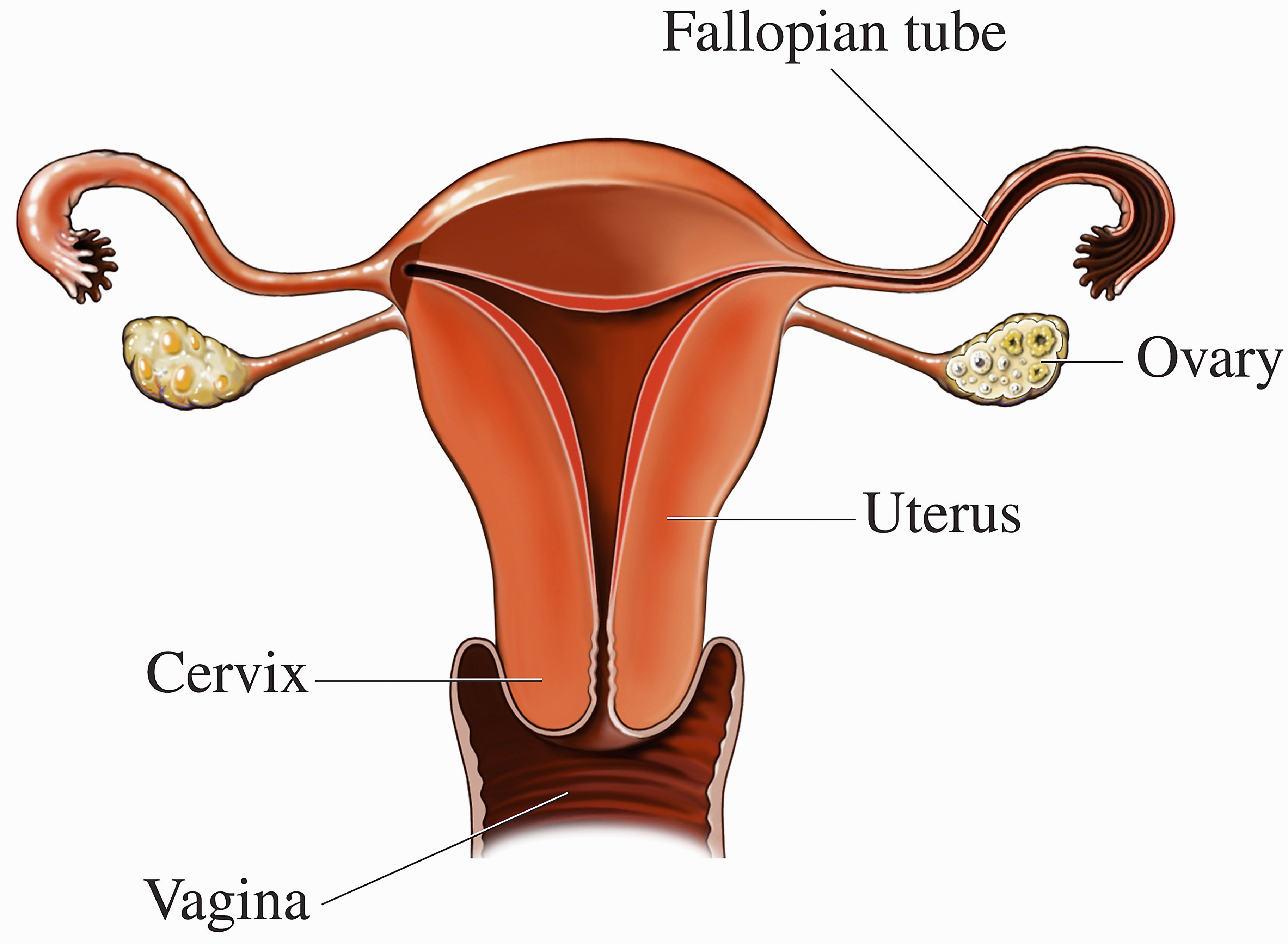 Artwork of the female reproductive system, showing the location of the ovaries.

The ovaries form part of the female reproductive system. Each woman has two ovaries. They are oval in shape, about four centimetres long and lie on either side of the womb (uterus) against the wall of the pelvis in a region known as the ovarian fossa. They are held in place by ligaments attached to the womb but are not directly attached to the rest of the female reproductive tract, e.g. the fallopian tubes.

What do the ovaries do?

The ovaries have two main reproductive functions in the body. They produce oocytes (eggs) for fertilisation and they produce the reproductive hormones, oestrogen and progesterone. The function of the ovaries is controlled by gonadotrophin-releasing hormone released from nerve cells in the hypothalamus which send their messages to the pituitary gland to produce luteinising hormone and follicle stimulating hormone. These are carried in the bloodstream to control the menstrual cycle.

The ovaries release an egg (oocyte) at the midway point of each menstrual cycle. Usually, only a single oocyte from one ovary is released during each menstrual cycle, with each ovary taking an alternate turn in releasing an egg. A female baby is born with all the eggs that she will ever have.This is estimated to be around two million, but by the time a girl reaches puberty, this number has decreased to about 400,000 eggs stored in her ovaries. From puberty to the menopause, only about 400–500 eggs will reach maturity, be released from the ovary (in a process called ovulation) and be capable of being fertilised in the fallopian tubes/uterine tube/oviduct of the female reproductive tract. 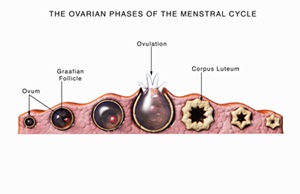 In the ovary, all eggs are initially enclosed in a single layer of cells known as a follicle, which supports the egg. Over time, these eggs begin to mature so that one is released from the ovary in each menstrual cycle. As the eggs mature, the cells in the follicle rapidly divide and the follicle becomes progressively larger. Many follicles lose the ability to function during this process, which can take several months, but one dominates in each menstrual cycle and the egg it contains is released at ovulation.

As the follicles develop, they produce the hormone oestrogen. Once the egg has been released at ovulation, the empty follicle that is left in the ovary is called the corpus luteum. This then releases the hormones progesterone (in a higher amount) and oestrogen (in a lower amount). These hormones prepare the lining of the uterus for potential pregnancy (in the event of the released egg being fertilised). If the released egg is not fertilised and pregnancy does not occur during a menstrual cycle, the corpus luteum breaks down and the secretion of oestrogen and progesterone stops. Because these hormones are no longer present, the lining of the womb starts to fall away and is removed from the body through menstruation. After menstruation, another cycle begins.

The menopause refers to the ending of a woman's reproductive years following her last menstruation. This is caused by the loss of all the remaining follicles in the ovary that contain eggs. When there are no more follicles or eggs, the ovary no longer secretes the hormones oestrogen and progesterone, which regulate the menstrual cycle. As a result, menstruation ceases.

What hormones do the ovaries produce?

If conception occurs during any one menstrual cycle, the corpus luteum does not lose its ability to function and continues to secrete oestrogen and progesterone, allowing the embryo to implant in the lining of the womb and form a placenta. At this point, development of the foetus begins.

What could go wrong with the ovaries?

Any medical conditions that stop the ovaries functioning properly can decrease a woman's fertility.

The most common disorder of the ovaries is polycystic ovary syndrome, which affects 5–10% of women of a reproductive age. In a polycystic ovary, the follicles mature to a certain stage, but then stop growing and fail to release an egg. These follicles appear as cysts in the ovaries on an ultrasound scan. Any abnormality that causes a loss of normal development of the ovaries, such as Turner syndrome, can result in the ovaries not functioning correctly and the loss of a woman's fertility. The ovaries can be damaged by treatments for other conditions, particularly chemotherapy or radiotherapy for cancer treatment.

If a woman stops having menstrual periods during her reproductive years, this condition is called amenorrhoea. It can be caused by a number of factors. These include hypothalamic amenorrhea, which may be caused by having a lean/athletic build, high levels of regular exercise, and psychological stress. In these cases, fertility can be restored by reducing the intensity of exercise, weight gain and psychological interventions such as cognitive behavioural therapy. Disorders of the pituitary gland can affect normal ovarian function because a lack of the hormones normally released from the pituitary gland will reduce the stimulation of hormone production and the development of follicles in the ovaries. Thyroid overactivity (thyrotoxicosis) can lead to amenorrhoea, as can any severe illness.