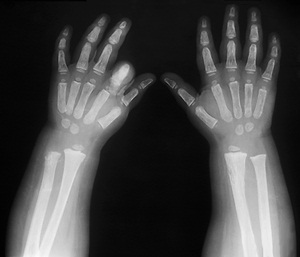 X-ray of the hands of a six year old with hypothyroidism: growth of the left index finger has been stunted.

Rarely, hypothyroidism can be caused by certain medications (for example lithium and amiodarone) or diseases of the pituitary gland.

What are the signs and symptoms of hypothyroidism?

The symptoms of hypothyroidism vary greatly from one person to another. Some people may have very few symptoms, while others are severely affected. To some extent these differences can be explained by how severe the hypothyroidism is. For example, in some cases the thyroid is completely unable to produce thyroid hormones while in others it can produce some, but not enough for the body’s needs.

Another reason for the symptoms being so different is the speed at which the hypothyroidism develops. This can be from a matter of days to years. The age of the person is also important. For instance, hypothyroidism in a child may cause poor growth.

The symptoms of hypothyroidism are not specific. Surveys of normal populations have shown that up to a third of all people experience symptoms similar to that of hypothyroidism. This causes confusion and sometimes a wrong belief that a person with otherwise unexplained symptoms must have hypothyroidism. The symptoms of hypothyroidism can include tiredness, weight gain, feeling the cold, slowing down physically and mentally, dry skin, loss of hair, muscle cramps and muscle weakness, puffiness around the eyes, gruff voice, depression, hearing loss and constipation. Women can develop heavy periods or they may lose them altogether. Some people with hypothyroidism develop an enlarged thyroid gland also known as goitre. The dual presence of autoimmune hypothyroidism and goitre is typical of Hashimoto’s thyroiditis, where the goitre is caused by the infiltration of immune cells within the thyroid gland.

How common is hypothyroidism?

People who have a relative with thyroid disease (either hyperthyroidism or hypothyroidism) are at a higher risk of developing hypothyroidism compared with the rest of the population. The genetics of hypothyroidism however are complex and it is not possible to predict if someone will develop hypothyroidism by a genetic test.

People who have other autoimmune conditions, such as type 1 diabetes, rheumatoid arthritis or multiple sclerosis, also have a higher risk of developing hypothyroidism compared with the rest of the population.

How is hypothyroidism diagnosed?

Hypothyroidism should be diagnosed by a doctor. To make an accurate diagnosis, a full medical history is first taken, followed by a physical examination and blood tests. The blood levels of the thyroid hormone thyroxine and thyroid stimulating hormone are measured. If hypothyroidism is confirmed, the levels of antibodies (special proteins produced by the immune system) specific for certain parts of the thyroid gland may also be measured. These tests are carried out on an outpatient basis, most often in a doctor’s surgery.

How is hypothyroidism treated?

Hypothyroidism is treated with levothyroxine tablets – a synthetic version of thyroxine given to replace the sub-optimal level of thyroid hormones. The treatment is given on an outpatient basis. Once the levothyroxine is absorbed in the bloodstream, it is converted to triiodothyronine, which is the active thyroid hormone that the tissues and cells require to function. Combination treatment of levothyroxine and triiodothyronine should not be used unless further research published in peer-reviewed journals demonstrates a greater benefit.

What are the longer-term implications of hypothyroidism?

People who are treated with levothyroxine have a normal life expectancy and lead a normal life. One of the commonest long-term problems is that it is easy to forget to take tablets regularly. Special pill boxes and counting tablets are sometimes helpful strategies. Once patients are on a stable dose of levothyroxine, an annual thyroid blood test is recommended.

The requirements of levothyroxine often increase in the early stages of pregnancy. Women with hypothyroidism who plan to get pregnant or who have just had a positive pregnancy test should have thyroid blood tests and regular monitoring of their thyroid hormones during pregnancy as the dose of levothyroxine needs to be increased usually by 30-50%. Untreated hypothyroidism during pregnancy may have severe consequences on the pregnancy outcome itself (including miscarriage, stillbirth, premature delivery) and cause a permanent impaired neurological development of the baby. Older people may require a reduction in the dose of levothyroxine as the requirements decline with age.

People with subclinical hypothyroidism may be given the option of taking levothyroxine, mainly depending on the presence of symptoms. If not, they require an annual thyroid blood test to determine if they go on to develop hypothyroidism.

Are there patient support groups for people with hypothyroidism?

British Thyroid Foundation may be able to provide advice and support to patients and their families dealing with hypothyroidism.