Somatotropin deficiency in childhood (somatotropin is a different name for growth hormone); hypopituitarism in childhood (a broader term covering deficiencies of various hormones originating from the pituitary gland); COGHD

What is childhood-onset growth hormone deficiency? 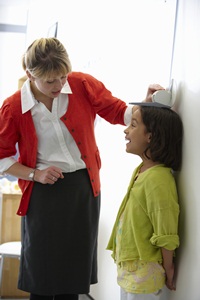 Doctor measuring the height of a young girl

Growth hormone is an essential hormone for growth and development. It is produced in the pituitary gland which is located near the base of the brain and attached to the hypothalamus. Growth hormone is transported in the blood all over the body to help with its many, complex functions, the most important of which, particularly in childhood, is growth. If the pituitary gland or the hypothalamus are damaged, the amount of growth hormone produced will be lower (this is called deficiency),   leading to a delayed speed in growth in the affected child and a reduction in height.

A child can be born with this defect (congenital) or acquire it later on in life (acquired).

Congenital growth hormone  deficiency , can be due to  defects in some of the genes involved with the production or the action of growth hormone or due to  abnormalities in the structure of the brain (for example, a small or absent pituitary gland). It can be also associated other abnormalities such as facial malformations or as part of a syndrome. Sometimes, the cause is not apparent, this is called idiopathic.

What are the signs and symptoms of childhood-onset growth hormone deficiency?

Signs and symptoms vary depending on the severity of the defect and the child’s age and can be difficult to identify.

In both early and later childhood, growth hormone deficiency is identified as slow growth compared with other children of the same age. . Often, the children look chubbier, shorter and younger for their age. Poor development of the bones in the middle of the face is also a sign of inadequate growth hormone. Body proportions and intelligence remain normal.

Growth hormone deficiency has been identified in about 1 in every 3,800 babies. Additionally, some children acquire it later in their life as a result of a brain tumour, brain operation, radiation therapy, injury or infection.

The child will show slow growth compared with other children of the same age when his height and weight are plotted on a growth chart. Doctors will need to ask many questions regarding the family and other health issues.

A number of specific blood tests will be taken in the outpatient’s hospital department or at a GP surgery to run this information against a wide range of possible conditions causing slow growth. During most of the day, growth hormone levels are very low in the blood, making single blood tests of growth hormone of limited value. Measurement of the hormone insulin-like growth factor-1 is a good indicator of growth hormone deficiency in childhood, but can be influenced by abnormalities of the liver, kidneys, thyroid and nutrition.

It is more accurate to focus on testing the individual child’s ability to produce growth hormone. This can be performed in several ways, but generally involves giving the child something to stimulate release of growth hormone, and then levels of growth hormone are checked by blood tests over the following 2–3 hours. An X-ray of the bones helps to estimate the potential for further growth. The overall assessment can be complex and requires an expert doctor with special interest in children's hormones (a paediatric endocrinologist).

Growth hormone has been manufactured since the 1980s. It is available only as a daily injection into the fat underneath the skin, although there are some injection devices available that do not involve needles. This injection is normally given in the evening to fit in with the body’s natural cycle for producing growth hormone. Expert monitoring of the correct dose, and advice on the most appropriate injection device is very important. The dose prescribed will vary from patient to patient, according to the weight and size of the child.

Generally there are few side-effects to the treatment; these occur more frequently if the dose is too high. Side-effects can include soreness and lumpiness of the skin at the injection site. Headaches, fluid retention, joint and muscle pains have also been reported. Growth hormone cannot be given to children with untreated cancer. If the patient is concerned about any side-effects, these should be discussed with the endocrinologist or GP.

What are the longer-term implications of childhood-onset growth hormone deficiency?

Treatment should start early and continue as long as the child is growing to prevent abnormally short stature and the consequent physical and psychological problems this can cause. Treated children generally achieve relatively normal height and development as long as they are diagnosed early enough to give time for ‘catch-up’ growth to occur. Like many medical conditions, this one requires regular specialist follow-up as an outpatient.