Adrenaline is a hormone released from the adrenal glands and its major action, together with noradrenaline, is to prepare the body for 'fight or flight'.
Adrenocorticotropic hormone Glossary All Hormones Resources for Hormones 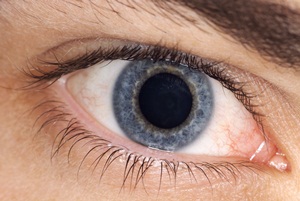 Adrenaline and noradrenaline are two separate but related chemical messengers. They are produced in the centre (medulla) of the adrenal glands and noradrenaline is also produced in some nerve cells (neurons) of the central peripheral nervous system. They are released into the bloodstream and serve as chemical mediators (hormone), and also convey the nerve impulses to various organs (neurotransmitters).

What are the actions of adrenaline?

Adrenaline has many different actions depending on the type of cells it is acting upon. However, the overall effect of adrenaline is to prepare the body for the ‘fight or flight’ response in times of stress, i.e. for vigorous and/or sudden action.

Key actions of adrenaline include increasing the heart rate, increasing blood pressure, expanding the air passages of the lungs, enlarging the pupil in the eye (see picture 1), decreasing the sensitivity to pain, improve vision, hearing and other senses, slowing digestion, redistributing blood to the muscles and altering the body’s metabolism, so as to maximise oxygen and nutrients to the body and increase blood glucose levels (primarily for the brain) as seen in picture 2.

A closely related hormone, noradrenaline, is released mainly from the nerve endings of the sympathetic nervous system (as well as in relatively small amounts from the adrenal medulla). There is a continuous low level of activity of the sympathetic nervous system resulting in release of noradrenaline into the circulation, but adrenaline release is increased at times of acute and chronic stress.

Overproduction of adrenaline is very common. Exercise increases levels of adrenaline temporarily. Most people are exposed to stressful situations on occasion and so most of us are familiar with the typical symptoms of adrenaline release, such as: rapid heartbeat, high blood pressure, anxiety, excessive sweating and palpitations. However, this is a normal response of the body which is intended to help us respond to a stressful situation. Once the acute stress is over, the symptoms quickly disappear as the excess secretion of adrenaline stops. However in cases of ongoing stress, cortisol, adrenaline and noradrenaline continue to be produced and can result in high blood pressure, headaches and weight gain.

Some people with obesity and untreated obstructive sleep apnea (a condition in which the breathing stops for short periods while sleeping) may be exposed to high levels of noradrenaline/adrenaline each night as they struggle to breathe; this might play a role in the development of high blood pressure in such people.

Very rarely, overproduction of adrenaline/noradrenaline may be caused by an adrenal tumour called pheochromocytoma or a paraganglioma (if it is located outside the adrenal gland but along the nerves of sympathetic nervous system that run through the chest and abdomen). Such tumours may run in families as well. The symptoms can include the typical symptoms of adrenaline excess on an intermittent basis but, in some cases, the symptoms can be quite mild so as to be barely noticeable. In other cases, it may cause flushing, sweating, headaches, rapid heartbeat and anxiety. The treatment for pheochromocytoma is surgery, and prior to that specific medications to control the blood pressure are required.

Suffering from too little adrenaline is very unusual, even if you have lost both adrenal glands through disease or surgery since 90% of the body’s noradrenaline comes from the nervous system (and noradrenaline performs similar functions in the body as adrenaline). 'Adrenaline deficiency' therefore does not really show up as a medical disorder except perhaps in exceedingly rare and unusual genetic catecholamine enzyme deficiencies.

Adrenaline is used in the treatment of life-threatening allergic reactions (Anaphylaxis), when the blood pressure is very low, to stop bleeding and when the heart stops beating suddenly