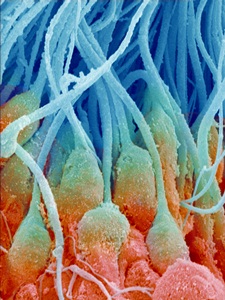 Coloured scanning electron micrograph of sperm cells that are developing inside a seminiferous tubule. The developing heads of the sperm cells are embedded in a layer of Sertoli cells (red) that nourish the developing sperm. Magnification: x3750

Where are the testes?

The testes, also known as testicles or male gonads, lie behind the penis in a pouch of skin called the scrotum. The testes move freely in the scrotum but each testis is attached to the body wall by a thin cord called the spermatic cord, which passes through a cavity in the pelvis and into the abdomen. The cord contains the nerves and blood vessels for the testes as well as the vas deferens, which carries the sperm from the testes into the urethra; the urethra is the passageway for sperm to the outside of the body at ejaculation.

The testes lie outside of the body and are maintained at a temperature about two degrees Centigrade lower than the body's core temperature. This is because sperm production and quality is optimal at this lower temperature.

What do the testes do?

The testes have two functions – to produce sperm and to produce hormones, particularly testosterone.

Sperm are produced in the seminiferous tubules of the testes. There are about 700 of these tubes in each testis, each is the length of an arm and the width of a few hairs; the whole collection of tubules is longer than a football pitch! Once the sperm are produced in the seminiferous tubules they pass into the epididymis, a long coiled tube in which sperm mature as they are conveyed along it. They are then ready to be released at ejaculation via the vas deferens.

What hormones do the testes produce?

Testosterone is important in the first stages of developing the male reproductive organs in a foetus. It also causes the development of male characteristics such as growth of facial hair, deepening of the voice and the growth spurt that takes place during puberty. Testosterone is important in maintaining these secondary male characteristics throughout a man’s life. From puberty onwards, testosterone provides the main stimulus for sperm production.

What could go wrong with the testes?

Many things can wrong with the testes; they can be grouped into physical injury and diseases or conditions that affect the function of the testes:

Other factors that can affect the function of the testes are radiation and chemotherapy (used in the treatment of cancer), certain drugs, and disorders of the pituitary gland that stop signals from the hormone (endocrine) system that trigger production of testosterone from the testes.