Klinefelter's syndrome is a genetic condition affecting boys and men that occurs as a result of the presence of one or more extra X chromosomes. The condition is typically characterised by tall stature, reduced fertility and development of breast tissue, although some patients have no clinical features other than reduced or absent sperm count.
Jet lag Male hypogonadism Glossary All Endocrine Conditions Resources for Endocrine Conditions

What is Klinefelter’s syndrome? 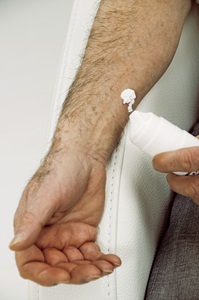 Man applying a skin cream containing testosterone used to replace this sex hormone in men who have lost their sex drive, or had their testes removed due to cancer or other diseases.

Klinefelter’s syndrome is a genetic disorder whereby a boy is born with one or more extra X chromosomes. Chromosomes carry our genetic information. Humans have 23 pairs of chromosomes (total 46 chromosomes), which are inherited from both parents. One pair is the sex chromosomes, which determine gender – boys usually have an X and a Y chromosome (XY), whereas girls have two X chromosomes (XX).

The extra one or more X chromosomes in Klinefelter’s syndrome may cause a number of features including tall stature, reduced fertility, development of breast tissue gynaecomastia) and problems with language and social interactions. There is, however, substantial variation in clinical presentation among individuals, and many cases remain undiagnosed.

Klinefelter’s syndrome is named after Dr Harry Klinefelter, who first described a collection of symptoms present in men with an extra X chromosome; therefore, it is sometimes called 47 XXY (47 refers to the total number of chromosomes in this condition).

What are the signs and symptoms of Klinefelter’s syndrome?

Not all individuals with this condition have the same symptoms or to the same degree; because of this variability, cases often remain undiagnosed. Symptoms depend on the proportion of cells in the body that contain an extra X chromosome (XXY), how much testosterone is being produced and the age at diagnosis.

From the time of puberty, most affected boys fail to make as much testosterone as unaffected boys. This can lead to a taller, less muscular appearance with less facial and body hair, impaired sex drive (libido) and difficulties maintaining erections (potency), and lower energy levels. Men with Klinefelter’s syndrome may develop breast enlargement (gynaecomastia) and thinning of the bones (osteoporosis). Characteristically, they have small, firm testes with a low or absent sperm count; almost all men who are 47 XXY will be infertile. However, most men with Klinefelter’s syndrome may have a normal sex life, especially when given appropriate treatment.

A significant proportion of men with Klinefelter’s syndrome have some kind of difficulty with language (problems reading or learning to talk initially) or executive functions (problem solving, task switching, planning, etc.) not dissimilar to people with dyslexia. They may also have trouble with social interactions throughout life, but particularly in childhood. The majority of men with Klinefelter’s syndrome lead an independent life, forming relationships and getting a normal job and have a normal life span.

How common is Klinefelter’s syndrome?

Klinefelter’s syndrome is a genetic condition but it is not inherited from the parents. In the vast majority of boys, there are no other affected family members; it occurs sporadically. The extra X chromosome can come from either the mother or the father. It is thought that older parents may be more likely to have a child with Klinefelter’s syndrome; this is probably because the risk of chromosomal abnormalities increases with age.

How is Klinefelter’s syndrome diagnosed?

The diagnosis of Klinefelter’s syndrome is confirmed by chromosomal analysis (karyotyping), which involves a blood test. This is usually carried out as an outpatient.

Karyotyping can also be performed during pregnancy by analysing the fluid surrounding the fetus (amniocentesis) or by obtaining placental tissue (chorionic villus sampling). Both these procedures carry some risk and are performed as an inpatient.

How is Klinefelter’s syndrome treated?

The underlying chromosomal problem (XXY) cannot be changed, so the aim of treatment is to help with symptoms and prevent complications in the long-term. Early identification of affected individuals is therefore helpful. Treatment will differ among individuals depending on their age at diagnosis and level of symptoms experienced.

Testosterone replacement therapy is important where levels are low, and may be required from the start of puberty. The dose is adjusted to maintain appropriate testosterone concentrations. Testosterone can be given in a number of ways but is usually given by gel, which is rubbed onto the skin every day, or by injection. This is done as an outpatient.

Testosterone replacement therapy helps to improve testosterone levels in order to aid muscle development, facial and body hair growth, and sex drive. It also helps to improve self-esteem, mood and maintain bone health. In addition, some men with Klinefelter’s syndrome may benefit from specialised fertility treatment to increase their chance of having children.

In individuals with Klinefelter’s syndrome who have developed breast enlargement, this sometimes becomes permanent. In these cases, surgery may be offered to restore normal male appearances.

Physical and occupational therapy may be helpful in affected boys with coordination and muscle problems.

Speech and behavioural therapy can help with speech difficulties, developing language skills, confidence issues and academic problems. It is important that these interventions are implemented as early as possible during childhood.

What are the longer-term implications of Klinefelter’s syndrome?

Adults with Klinefelter’s syndrome are more likely to have a number of health issues such as osteoporosis; obesity; varicose veins and leg ulcers; development of autoimmune conditions (diabetes mellitus' data-content='1282' >diabetes mellitus, systemic lupus erythematosus and thyroid problems); chest conditions (bronchitis and emphysema); and there may be an increase in some cancers (breast cancer, germ cell tumours, non-Hodgkin’s lymphoma). Men with Klinefelter’s syndrome are also thought to be at an increased risk of developing chronic health problems such as cardiovascular, respiratory and gastrointestinal disease. All people with Klinefelter’s syndrome should therefore have regular check-ups during adult life, ideally in a specialist endocrinology clinic, both to monitor their general health and particularly to monitor testosterone replacement therapy.

Fertility problems are common in men with Klinefelter’s syndrome. However, more recent specialised fertility techniques such as microsurgical testicular sperm extraction and intracytoplasmic sperm injection have helped some men with Klinefelter’s syndrome to father children. If patients have any concerns, they should discuss them with their doctor.

Are there patient support groups for people with Klinefelter's syndrome?

Klinefelter's Syndrome Association UK may be able to provide advice and support to patients and their families.