Steroid and peptide hormones are involved in a large number of functions in the body. All animals produce hormones, some of these hormones act to control the reproductive system, while others are produced in response to certain types of stress. Some signals can also be secreted outside the body, these are called pheromones and help animals communicate in the wild.

In times of stress, hormones such as glucocorticoids are produced by the adrenal glands. Cortisol is the main glucocorticoid in most large animal species. The other major glucocorticoid - corticosterone - is higher in species of animals such as amphibians, rodents, reptiles and birds. The ratio of cortisol to corticosterone produced by an animal varies from one species to another. The understanding of the different hormones and their interactions in different animals is called comparative endocrinology. Glucocorticoids have a number of effects including controlling the balance of glucose in the body by encouraging glucose production, suppressing the body’s immune system and stimulating fat, protein and carbohydrate metabolism. Stress hormones are also linked with a reduction in the level of reproductive hormones, suppressing the ability to reproduce.

In the past it was only possible to study hormones in the body by measuring their levels in the blood. This meant that animals had to be anaesthetised or restrained in some other way to obtain the samples needed for testing. However, in the last 20 years scientists have developed methods that allow the study of hormones, either by non-invasive methods or without actually handling the animals - for example, through detection of hormones in an animal’s urine, hair, saliva or faeces. This has made it possible to carry out long-term studies of hormones in both captive and wild animals. These techniques also avoid the need to use anaesthesia or to restrain the animal to obtain a sample, both of which can affect the very hormones being studied because they raise stress levels.

There are a number of ways that studies of these hormones in animals can be used for conservation; both in zoos and in the wild.

How can we use hormone measurements?

Hormone measurements can be used to learn about the basic reproductive biology of threatened or endangered wildlife species. This knowledge can help animal experts recognise disturbances in the reproductive processes of particular species living in the wild and can also be used to plan captive breeding programmes for endangered species or monitor pregnancy and health in captive animals. Changes in the time that puberty starts or in pregnancy rates can be studied in different situations; for example, in response to changes in weather, habitat, availability of food or social situations. 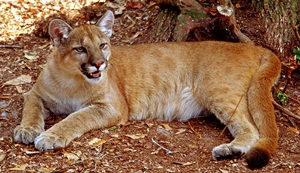 Changes in pregnancy rates of free-living wild animals can be useful indicators of the health of a particular animal population, they can also help in identifying problems that may affect the continued viability of the population for example if there is a fall in the number of pregnancies and births. The impact of environmental poisons (toxins) on reproductive cycles and in turn the health of wildlife can also be measured by monitoring reproductive cycles, pregnancy and birth rates in wildlife populations.

In a number of free-living wildlife species reproductive problems have been seen, some of these include changes in fertility; reduced survival of offspring; altered production or activity of hormones; and abnormal reproductive anatomy. It has been suggested that this may be caused by pollution and toxins in the surrounding environment, which disrupt the normal effects of the animals’ hormones (endocrine disruptors). The most widely recognised endocrine disruptors are hormone-like substances that are similar to the reproductive hormone oestrogen. These compounds can interfere with the normal oestrogen signalling pathways.

The endocrine system influences the way body systems are organised in developing embryos, which, among other actions can affect reproductive function later in life. Environmental pollution, which interferes with the normal hormonal signals in the body, can permanently alter and harm the ability to reproduce in the future. This has been seen in a number of reptile and bird species.

Another example is the endangered Florida panther; scientists believe environmental chemicals may be having a harmful effect on their ability to reproduce and, therefore, the potential future survival of the species. Researchers have shown that there appears to be no difference in the measured levels of oestrogen in the blood between male and female panthers; and a number of possible endocrine disruptors have been identified in the local environment. Scientists suspect that male panthers have been de-masculinised and feminised because of early exposure to environmental pollution.

Measurement of the hormones cortisol or corticosterone, which are produced by the adrenal glands in times of stress, can be used to provide information on the body’s response to a wide variety of situations. Regular and long-term monitoring of hormones associated with both stress and reproduction will help researchers to understand how animals respond to a variety of situations. For example, these hormones have been used to assess how stressed a deer is while being hunted. They are also used to help improve welfare in animals in captivity (such as farm animals) by assessing how they respond to different housing conditions.
By measuring key hormones in captive or free-living endangered wildlife, researchers can determine the impact of certain events on animal health and reproduction and use this information to make management decisions for both captive and free-ranging animal populations.

Examples of natural situations that may impact on captive or free-living wildlife include:

1. Variations in weather such as rainfall or temperature, which can cause droughts or floods and lead to shortages of water or food.

2. Social situations such as changes in the animal's social group through loss or movement of other members of the species.

Human activity can also have a major effect on other animal species, such examples include:

1. Changes to habitat by being reduced in size (such as deforestation) or broken up (through road or house building).

2. The introduction of non-native species.