What is Paget’s disease? 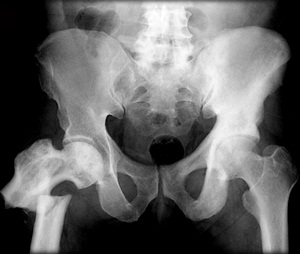 Frontal X-ray of a human pelvis and hips with a severe fracture of the right femur near the hip, caused by Paget's disease, which weakens bones and predisposes them to fracture.

Paget’s disease is a common, chronic bone disorder. In Paget’s disease, the internal structure of bones is disrupted, resulting in possible deformity and weakening. It is most commonly found in the spine, thigh, skull, pelvis and sternum bones. For most patients, Paget’s disease affects several different bones. However, in one third of people, only one bone is affected. The disease can slowly extend in an affected bone but does not spread between bones. Many people with Paget’s disease have no symptoms and are unaware they have the condition. It is slightly more frequent in men than women.

Bone is a living tissue that is constantly being renewed through a process known as remodelling. Cells in the bone called osteoclasts break down old damaged bone to make way for new bone that is laid down by cells called osteoblasts. In normal healthy bones, about 10% of the bone is replaced in this way every year, and the amount of bone removed is balanced by the amount of new bone laid down. However, in Paget’s disease the osteoclasts are bigger and more active than usual and break down bone more rapidly. In response to this, the osteoblasts deposit new bone, but because they are doing this very quickly to try to keep up with the fast bone removal, the bone they make is not very well organised, leading to abnormal bone shape and weakness. Imagine trying to build a brick wall very quickly; the bricks won’t be perfectly lined up and the wall will not be straight.

What are the signs and symptoms of Paget’s disease?

The majority of patients have no symptoms and many individuals are unaware that they have the disease until it is discovered when the patient is being examined for other reasons.

Pain arising from the affected bone is the most common symptom. Since Paget’s disease can cause a greater risk of fractures in affected bones, patients may initially go to the doctor with a fracture.

Different signs or symptoms can sometimes be seen depending on which bones are affect. For example, if the Paget’s disease affects bones in the skull, this may also cause deafness. If Paget’s disease is in the spine, this may lead to pressure on nerves causing pain and leg weakness. If the ends of bones near the joint are affected, it can cause osteoarthritis in the joint. If the affected bones supports body weight, it may deform into a bowed or bent shape.

How common is Paget’s disease?

Rarely seen in the younger population, Paget’s disease occurs in up to 2% of mainly white adults older than 55 years. By around the age of 80, approximately 8% of men and 5% of women will have developed the condition. The UK has the highest occurrence of Paget’s disease in the world but it is also common in western and southern Europe, the USA, Australia and New Zealand. Over the past 25 years, both the number of cases and the severity of disease have reduced in the UK.

Genetic factors play an important role since about 10-20% of people have a family history of the disease. A number of genes have been identified, an important one being Sequestosome 1, (SQSTM1) with abnormalities in this gene accounting for 20–50% of cases of family-related disease. Abnormalities in three other genes, which are involved in regulating the rate of bone repair, also appear to play a large part in the risk of developing Paget’s disease.

How is Paget’s disease diagnosed?

Paget’s disease is identified by:

A bone biopsy is required very occasionally if there is doubt about the diagnosis.

All of these tests are usually performed as an outpatient.

How is Paget’s disease treated?

Medication called bisphosphonates are the main treatment option (they are also very commonly used to treat osteoporosis). They help to restore the normal structure of bone and can also help to reduce pain caused by active disease. As these drugs are deposited in the bone, the benefit from one course of treatment may last for months or years and, if given in the early stages, may prevent further complications.

There may be associated complications that will involve surgery; it may be necessary to repair a fracture, replace a joint damaged by osteoarthritis or to correct very noticeable bone deformity.

Flu-like symptoms can occur 24–48 hours after treatment with zoledronate and can be linked with bone and joint pains. There may be short-term redness and swelling at the site of infusion and, rarely, eye inflammation. Zoledronate has occasionally been associated with irregular heartbeat (atrial fibrillation) but the cause of this has not been established.

Risedronate may cause indigestion and occasional joint and bone pains and, rarely, can give rise to skin rashes and eye inflammation. In patients treated with bisphosphonates for a longer time, there are other possible side effects (osteonecrosis of the jaw and atypical femoral fracture),and it is important to ensure dental work is undertaken prior to bisphosphonate treatment.

What are the longer-term implications of Paget’s disease?

These are rare and the majority of patients with Paget’s disease are able to lead a normal, active life.

When treating Paget’s disease, a multidisciplinary approach should be adopted. Although appropriate treatment will minimise complications, deformity and joint damage can restrict mobility in some people causing the need to use walking aids and adaptations at home. Deafness, associated with the disease affecting the skull, can have an impact on communication and other social factors. Uncontrolled pain can give rise to reduced physical function and increase emotional and psychological problems that could impair quality of life. Very rarely, a  bone tumour (osteosarcoma or giant cell tumour) may be found and this will usually require assessment by a bone surgeon (orthopaedic surgeon).