Growth of the fetus during pregnancy is regulated by a balance of hormones.
Hormones of pregnancy and labour Erectile dysfunction Glossary All Topical issues Resources for Topical issues

The environment in which a baby develops is not only important for its survival at birth but also for its long-term health. During pregnancy, it is important for the baby to receive the correct amount of nutrition and for it grow to an appropriate size. The baby communicates its changing nutritional needs and the mother’s body responds to this accordingly. This conversation between mother and baby is spoken in the language of hormones.

Why is fetal weight important during pregnancy? 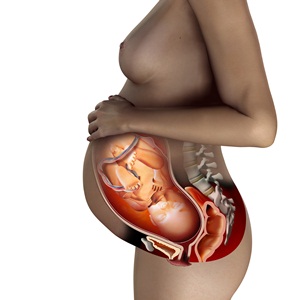 Computer artwork showing a full-term fetus in the womb.

Several different hormones carefully regulate the growth of the fetus during pregnancy. Some hormones promote growth, while others have the opposite effect. It is vital the balance of these hormones is correct so that fetal growth occurs at a suitable pace throughout pregnancy. Hormones act to prevent fetal overgrowth and undergrowth by carefully controlling the supply of nutrients that pass across the placenta. The placenta acts as an interface between the mother and baby allowing regulated passage of oxygen and nutrients to the fetus. In addition, the placenta produces and responds to hormones that regulate fetal growth and development.

If a baby is born either too large (macrosomic) or too small (growth restricted), it can put you and your baby at greater risk of certain complications. Macrosomic babies often cause obstetric problems such as shoulder dystocia: a difficult labour in which significant medical intervention (possibly emergency Caesarean section) is needed for the baby’s shoulders and body to be delivered. Macrosomic babies have been shown to be more likely to develop later glucose intolerance (a condition often leading to diabetes mellitus) and obesity as adolescents and adults. Growth restricted babies are more at risk of health problems than normal sized babies and are also more prone to developing diseases such as hypertension, coronary heart disease and diabetes mellitus as adults.

Insulin, which is best known for regulating blood sugar levels, stimulates fetal growth and so a lack of this hormone can lead to a growth restricted baby. The primary sugar (glucose) that circulates in blood provides energy for a growing baby, which unlike its mother, is not able to make glucose for itself. The mother will have to supply all the glucose the baby needs for powering processes like tissue growth and laying down fat. During pregnancy, the mother’s body becomes less sensitive to the effects of insulin and so excess glucose is present in the maternal blood, available for passage across the placenta, but the fetus also produces insulin; so when glucose passes across the placenta, insulin stimulates its uptake into fetal tissues allowing it to be used as an energy source. This, in turn, allows tissue growth, or the glucose is converted and stored as fat. By keeping the fetal blood clear of glucose, fetal insulin stimulates the placenta to allow more glucose to pass to the fetus.

Some women can experience a type of diabetes that is specific to pregnancy, known as gestational diabetes. Insulin, like all hormones, works by attaching to receptors on target tissues in the body, much like a key fits a lock. In gestational diabetes, the receptors that insulin normally binds to do not work properly and glucose is not cleared out of the mother’s blood. This leaves excessive amounts of glucose in the mother’s blood, which passes across the placenta to the fetus; too much glucose can lead to a macrosomic baby. Overweight and obese women are more likely to suffer with gestational diabetes than normal weight women, but this problem can be managed by limiting weight gain during pregnancy with careful exercise and healthy eating habits. It is important to control this condition, but should it arise, medication (primarily metformin) can be used to treat it and reduce glucose levels.

There are two types of insulin-like growth factor – IGF-I and IGF-II. Studies have shown that the higher the level of IGF-I in fetal blood, the greater the fetal weight at birth. Insufficient IGF-I during pregnancy results in a growth restricted baby, which struggles to grow after birth. However, cases of this are very rare and are usually a result of a genetic disorder. In normal pregnancy, IGF-I is thought to act as a ‘nutrient sensor’ checking which nutrients are present and how much of them are available, and then matching this to fetal demand. This is significant because the different types of nutrients the baby receives can be just as important as the overall amount. IGF-I is central to this effect because it can alter the passage of nutrients across the placenta, varying the amount and speed of transfer of the different types of nutrients, in response to changing fetal demand. The ability of IGF-I to change placental transport of nutrients can also be used to counteract the effects of under-nutrition; if the fetus is not getting enough nutrition to grow properly, IGF-I is able to sense this and increase the amount of nutrients passing across the placenta.

Unlike IGF-I, IGF-II levels do not seem to change in response to differences in nutrient availability or fetal nutrient demand nor is it correlated to fetal weight like IGF-I. This hormone helps the fetus grow by affecting the growth of the placenta. Because IGF-II stimulates the growth of the placenta, it allows more nutrients to pass to the fetus. If there is a lack of IGF-II, the placenta does not grow and develop correctly and so its function is compromised. This can result in a growth restricted baby that did not receive all the nutrition required during pregnancy. If too much IGF-II is present, it can lead to fetal overgrowth and a macrosomic baby; however, this is a rare occurrence and is only usually seen in genetic disorders, such as Beckwith-Wiedemann syndrome.

The insulin-like growth factors work together to stimulate and control etal growth via changes in size and function of the placenta. IGF-II is important for placental growth and development, whereas IGF-I finely tunes what passes across the placenta. This means IGF-I levels respond to changes in both the maternal environment and fetal demand, ensuring the growing baby is supplied with everything it needs.

Other hormones, such as the steroid hormones corticosterone and cortisol, are important for fetal development during pregnancy. These steroids belong to a family of hormones, called the glucocorticoids, which are known to be associated with the regulation of stress. Unlike insulin and IGFs, glucocorticoids limit fetal growth and coordinate the development of fetal tissues and organs. As pregnancy nears term, a surge in glucocorticoids produced by the fetus can be detected. This naturally slows fetal growth, in favour of maturing and developing fetal tissues and organs. It is vital that the fetal tissues and organs go through this process at this time, in order for them to function properly outside of the womb. Women in Europe and the USA are given the glucocorticoid dexamethasone if labour begins before 37 weeks of pregnancy - this stimulates maturation of the baby’s tissues and organs (especially the lungs), so even if the baby arrives earlier than expected, the baby should be able to breathe and function outside of the womb. This medical intervention significantly decreases the mortality and morbidity rates of premature babies.

Glucocorticoids switch the pattern of fetal development from tissue growth to specialisation; so instead of building the tissues, glucocorticoids help them mature, thus preparing the baby for life after birth. However, if the fetus is exposed to large amounts of glucocorticoids prematurely, the normal pattern of fetal growth is disturbed and fetal tissue development occurs incorrectly, which can have long-term health consequences. Stress triggers the production of cortisol from the mother’s adrenal glands and so high levels of cortisol cross the placenta and result in growth restricted babies and pre-term birth. This is why pregnant women should avoid stress wherever possible. Studies have also shown that in very stressful situations, such as natural disasters, pregnant women are more likely to have growth restricted babies that are born prematurely due to the large amounts of cortisol made by the mother. Babies that are born before term, especially if they have a low birth weight, are often less likely to survive after birth and may experience long-term health consequences, such as developmental problems and learning disabilities. Glucocorticoids are therefore vitally important to normal fetal growth and health; however, they must be present at the correct levels and at the correct time to ensure they do not have adverse effects on either the mother or the baby.

Hormones of pregnancy and labour